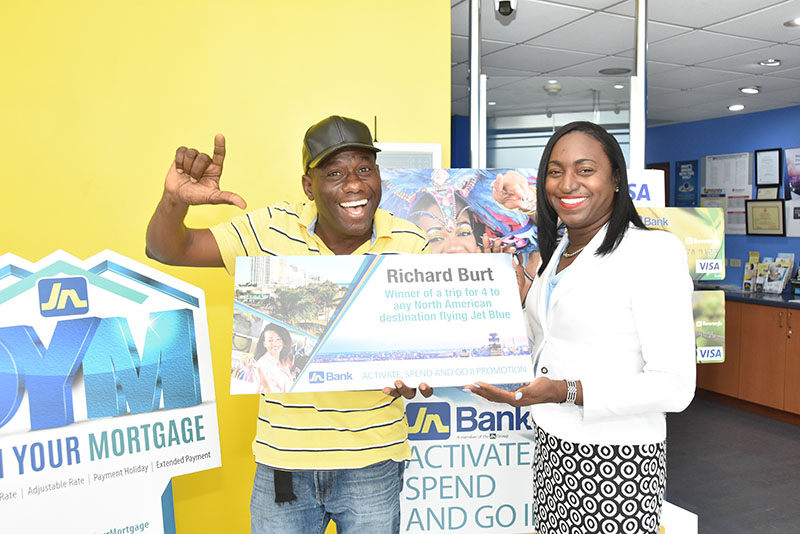 A St Catherine man was hit with tragedy and a windfall in the space of months when his home was broken into by thieves in December and he won a dream vacation from JN Bank a few months later.

Richard Burt, a 29-year veteran of the Jamaica Constabulary Force, said the grand prize win was the answer to his prayers.

“When I received the call, I couldn’t believe it. Initially, I thought it was a scam. I almost hung up on the caller,” he admitted. “However, I was finally convinced when they allowed me to speak with a gentleman from the Betting, Gaming and Lotteries Commission.”

Mr Burt is the winner of the final grand prize draw in the JN Bank Activate, Spend and Go II promotion, which ended last month.

He won a trip for four, to any North American destination, flying via Jet Blue, after simply activating and spending approximately $10,000 with his JN Bank VISA credit card.

He also received US$1,500 spending money, as part of the winning package.

Mr Burt explained that the prize from JN was the ‘good news’ the family had been hoping for after a very dark period in their lives.

Just a few weeks before, he and his wife, Antoinette Morgan-Burt, were set to travel to the United States of America for a vacation, to celebrate their wedding anniversary, tragedy struck.

They returned home one evening to find that their home was burglarised.

“The place was ransacked. They stole so much from us, money, appliances, even our passports, with our visas were gone. It was a dark time for us,” said Mr Burt. “I went through a mix of emotions. I was sad and disappointed that we lost so much and I was angry and felt violated that a stranger was in my home.”

Mr Burt said he was forced to cancel his trip, because the funds they were saving for the vacation was taken by the thieves.

However, he did not lose hope. “I am a praying person, who always try to look on the positive side of things; and, I believe that once you still have life, you have the ability and the hope to start over,” he relates.

Four months later, the Burts, who had resumed plans for their well-deserved vacation, received a call from JN Bank.

“We had gotten back our passports a few days before; however, we weren’t even sure that we could afford to make the trip, as a family. I was actually considering taking the trip without my husband,” Mrs Morgan-Burt said. “Therefore, it was nothing short of a miracle, when my husband told me he received a call from JN Bank, informing him that he had won a trip for four to North America.”

Mrs Morgan-Burt said the family is now in the process of re-applying for their visas. “Hopefully, we’ll all be able to travel to Atlanta, later this year,” she declared.