A Superb Act of Kindness

Enrieka Blagrove, the 2020 scholarship recipient of the JN Wise Aspiring Youth (WAY) programme, has started the year by exercising a heart-warming gesture. He re-gifted the scholarship he received to a colleague and fellow JN WAY Ambassador, Cydon Bowen. 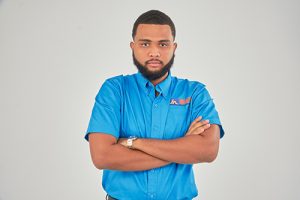 Top JN WAY Sales Ambassador and Marketer of the Year and individual to whom the scholarship was re-gifted.

“I was on Twitter one day, when I saw a tweet from Cydon, indicating that he was not financially cleared at The University of the West Indies (UWI), Mona; and was unable to see his grades, or register for the upcoming semester. I immediately decided to contact Shanna Kaye Wright Vaughn, youth banking officer at Jamaica National, and recommended that the scholarship be transferred to Cydon, as he needed it more than I did,” the final year Accounting and Management Studies double major at The UWI Mona Western Jamaica Campus, explained.

Mr Bowen, who was awarded the top JN WAY Sales Ambassador and Marketer of the Year, says that Blagrove’s act of kindness brought him to tears and it is probably one of the best things that anyone has ever done for him.

“Leading up to getting the scholarship, I was very sad and demotivated, because I saw everyone posting about their grades and I couldn’t see mine. I put in a lot of hard work; and I knew I had a good GPA, and could apply for a scholarship; but I wasn’t able to get a copy of my transcript, because I wasn’t financially cleared.

“Enrieka reached out to me and told me that he had already paid his tuition; therefore, he will give me the scholarship. I froze when he told me. I told him that even if the scholarship was not able to be transferred, I was just grateful that he thought of me. The amount I owed to the UWI was $150,000 and the scholarship was exactly $150,000,” he said, smiling.

Mrs Wright Vaughn said that Mr Blagrove’s gratifying act was not a surprise to her, because he was supportive of his team and even the JN Family, as he is frequently at the Catherine Hall location, assisting in any way needed.

“Enrieka is a truly the embodiment of what the JN WAY Programme stands for. The official theme for the programme has been “Explore, Aspire, Inspire,” and he is true to each element. He was able to find out that his teammate was having some challenges and he sought a solution, which has truly encouraged us all with this honourable display. The JN WAY team members always say: “One Team, One Dream,” and Enrieka has truly shown this by his caring support,” she exclaimed proudly.

She added that Enrieka is, “A calm professional who is also a reliable, trustworthy and efficient JN WAY Ambassador.”

Mr Blagrove, who was also a recipient of the Tryall Foundation Scholarship last year, is in his second consecutive year of being a JN WAY Ambassador and holds the title of Deputy Chief Ambassador for 2020/2021.

“When I started at the UWI, I didn’t know where the first cent to pay for my tuition was coming from; but I have been on the receiving end of many benevolent persons. I have not had to use funds from my pocket to finance my education; therefore, I just want to “pay it forward,” the 22-year-old declared.

He acknowledged that the first scholarship he received to attend university was from the MoBay City Run Foundation, where he is a volunteer. He was a recipient from 2018-2020.

Committed to giving back to his community, he is also a volunteer at the I Love MoBay Foundation.

An active youth and student leader, Mr Blagrove is the Treasurer for the Guild Council at The UWI Western Jamaica Campus; and is a UWI STAT Ambassador- a Vice Chancellor Student Representative; and was the 2017/2018 Deputy Head Boy at the Cornwall College.

“Growing up in the volatile community of Rose Heights in Montego Bay, I saw that there was a lack of student leadership and youth engagement; therefore, I wanted to be that agent of change in my community,” he said.

Mr Blagrove is a member of the Faith Temple Assemblies of God in Montego Bay; and views his success as a direct blessing from God.

“I might not have been where I am, if God did not strategically place people in my life to help me reach where I am today,” he admitted.

Some of the persons whom he says have helped him tremendously along his journey and who he looks up to are Janet Silvera, founder of the MoBay City Run Foundation; his mentor Hope Sterling; and his pastor and Custos of St. James, Bishop Conrad Pitkin, along with his church family.

Mr Blagrove credits the JN WAY programme for aiding him in his personal and professional development.

“Through the programme, I have become more outspoken and have been able to network with and advise a lot of people. I am now a financial literacy speaker, because of my involvement with JN WAY, he said proudly. “And I also started the Financial Literacy Symposium for Youths at The UWI Mona, Western Jamaica Campus.”

Michael Collins, team lead for the Youth Banking Unit at JN Bank, underscored Blagrove’s sentiments saying that the programme is one way through which JN Bank has been grooming young men and women in society, to become well-rounded persons in character, job skills, personal growth, and development.

“Enrieka is a symbol of the impact the programme has had on the over 200 JN WAY Ambassadors we have had, since inception of the programme in 2013.  Our team at the Youth Banking Unit continues to expand the Bank’s scope of impact on the lives of these young people; providing them with exposure to the world of work; financial literacy and empowerment; as well as sales and social media engagement skills,” he affirmed.