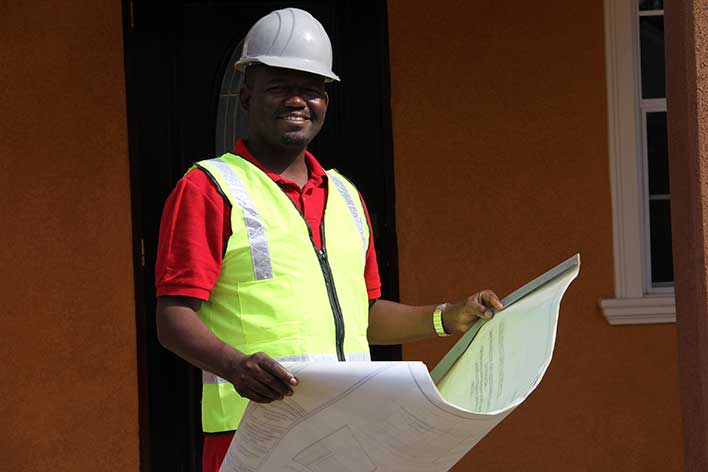 Leighton Whyte on the job at one of his many project sites.

From his Kindergarten days at the Little Angels Basic School in Grants Pen, St Andrew, Leighton Whyte realised that he had a knack for drawing and designing.  Daily, he immersed himself in sketching cartoon figures, cars and people in his school books.

“Not even my mother’s bible was spared,” he said. “I drew on the blank pages on the inside covers. Every piece of paper I got hold of I drew on it.”

Some three decades later, Leighton still spends a significant part of his day drawing, but not with a pencil and a sketch pad, as he was accustomed to during his childhood.  Using Computer Aided Drafting (CAD) software, such as Autodesk Revit and Vectorworks, he sketches detailed designs on computer for the next landmark project.

Today, Leighton, an accomplished professional architect, registered with the Architects Registration Board of Jamaica, is Acting Senior Project Manager at the Urban Development Corporation (UDC). He executes the planning and administering of complex design programmes, proposals and contracts.

When he is not drawing, he dons a hard hat and hard boots, and heads to worksites to assess projects in progress by contractors; as well as to work in tandem with urban planners, quantity surveyors, landscape and interior designers.

Among the major projects he accomplished recently was formulating the creation of the first Ocho Rios Town Management plan, which entails conceptualizing and designing various projects in the town. Currently, he focuses on the managing and implementation of the redevelopment planning components for downtown Kingston.

“It’s a demanding job that keeps your mind constantly occupied.  Even in my sleep, I’m designed and planned.  In the middle of the night I get up to sketch.  What I like most about my work is conceptualizing a project, getting information, talking with clients to determine their needs, and seeing their satisfaction following its successful completion.”

Leighton reminisced being ushered into the architectural field as a result of a Career Day Talk when he was in Grade Three at the Dunrobin Primary School.  His class teacher, whom he only remembers as Mrs White, invited her son who was studying architecture at the University of Technology, Jamaica (UTECH) to address the class.

“That was the first time I heard about architecture. Instantly, I was interested in that career, because it had a drawing component to it,” he related.

At nine years old, following his successful sitting of the then Common Entrance Examination in Grade Four, he entered Calabar High School.  There, he focused on subjects, such as Technical Drawing, Woodwork and Physics with the hope that his passes in the Caribbean Examination Council (CXC) would help his acceptance in the architectural programme at UTECH.

However, although he obtained outstanding passes in all subjects taken in CXC, Leighton faced an uphill battle.

Too Young To Matriculate

“I was around 14 years old when I graduated from high school, therefore, I was too young to matriculate to UTECH,” he pointed out.

Determined to keep his dream career alive, he enrolled in the two-year Construction Technology Programme at EXED Community College, which the avid saver was able to pay for in part from his savings as a young member of what was then the Jamaica National Building Society, now JN Bank.

Despite his academic success, Leighton still had another hurdle to cross.

“Back then, there were limited spaces at UTECH for students studying architecture as the university catered to students across the Caribbean.”

To make himself more competitive, he registered for another Construction Technology programme, this time at UTECH, where he spent two years, before finally getting one of the coveted spaces in the second year of the Bachelor of Arts Architectural programme.

In addition, he received the Trinidad-based Abel/ Bestcrete Architectural Award for Architectural Design and Excellence, based on his design proposal for a state-of-the-art Police Station for New Kingston. He was also one of two student delegates selected to attend the Union Internationale des Architects XXI World Congress of Architecture in Berlin, Germany in 2002.

During the second year, his architectural skills were discovered by one of his lecturers, Michael Lorde, who arranged an internship for him at Marvin Goodman & Associates during the holidays.  Following completion of his studies, Leighton gained full-time employment with the company as a project architect, and acquired practical experience over the next seven years.  During that period, he also pursued the Master’s degree in Architecture at UTECH, and emerged with the best academic performance in his cohort.

Marvin Goodman, principal of Marvin Goodman & Associates, pointed out that Leighton was a valuable member of his team.

“He is a wonderful young man who is extremely talented and responsible.  One of the first assignments he received was to administer the contract for a building under construction, which required him to do site visits and writing reports. He always did a great job at anything he was assigned.”

One of Leighton’s early architectural undertakings was a proposal for the interior layout for the Express Area of three locations at JN Bank.

Although the drawing was not used as the blueprint in the end, it was work that Leighton was proud of and pleased to have been granted the opportunity.  Today the JN Bank Express offers a secured 24-hour facility at branches, where members can quickly use ATMs to deposit funds, even without the need for an ATM card; make withdrawals and check account balances, as well as access US dollars. Members can also service JN Small Business Loan payments in the facility any time of day.

A family man, Leighton ensures that his family remains his number one priority.  Married for the past seven years to Tamara, a banker, and they have a one-year-old child, Zachrai.  As a couple, they enjoy sightseeing, particularly in Portland, and dining at EITS, which is the Europe in the Summer café located near Newcastle, in the Blue Mountains.

“My wife and I pay keen attention to what we eat.  She is a vegetarian and I eat very little meat.  Therefore, we tend to eat natural foods, fruits and vegetables,” he said.

A devout Christian, Leighton firmly believes in putting God at the helm of all his endeavours, and attributes his successes to Him.

“You can achieve what you desire, once you put your plans before the Lord and work hard towards your goals,” he maintains.