Client Relationship Officer at JN Bank, Karon Lewis, has urged young people not to be satisfied with mediocrity. He says, instead, they must set high expectations for themselves and pursue those goals with alacrity.

The Munro Old Boy was addressing members of the Graduation Class of 2019, at his alma mater, recently, as he sought to inspire the young men never to be satisfied with being “average”.

Highlighting a lesson from his father during one of his boyhood escapades in the bushes of Bull Savannah, in south eastern St Elizabeth, the 25 year-old Mr Lewis, a former Governor-General Achievement Award recipient, made the point that, “almost doesn’t count.”

“Two of my other cousins and I were shooting birds, but the three of us together could not be one bird shooter, but we pressed on,” he reminisced happily about his boyhood summers, to the young Munro students. “Daddy was always our biggest fan. He was the one who always had to build our slings, or as we called them back then, ‘spurs’.” 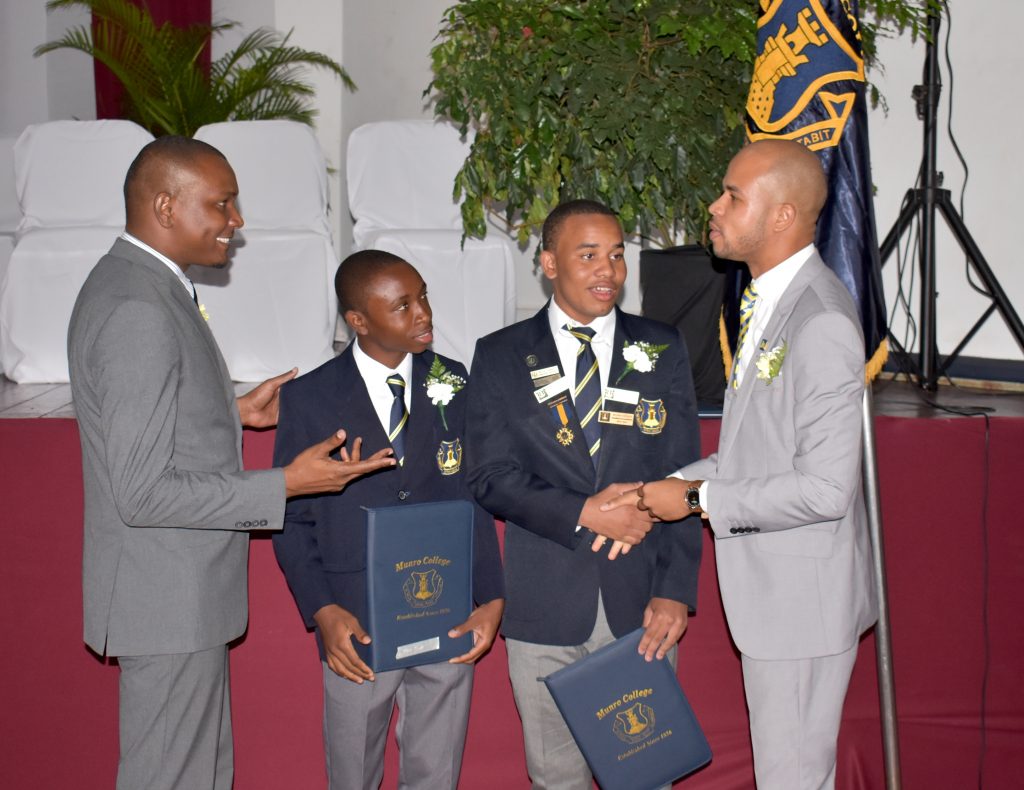 Mr Lewis continued his story: “He was always enquiring about the day’s kill, and more often than not, the count stood at zero. One afternoon I came home brimming with pride. When he enquired about the day’s activities, I told him we almost killed a ground dove. He responded by saying: ‘Almost never kill the bird’.”

The lesson stuck with Mr Lewis; and he used it to make his point to the young men.

He said “almost” is the demarcation, which one must crossover to achieve success; therefore, there one cannot be satisfied with simply getting to the line.

“Almost represents the line between you and the actual. It is what is responsible for you becoming an average version of yourself, or actually becoming your truest self; and I am very certain that none of you struggled to come this far to become just average,” he told the young men.

Mr Lewis went on to encourage the Munronians to set a vision for what they want to achieve, even if they don’t have a specific plan in place at this point. Quoting media mogul, Oprah Winfrey, he told them that:

“You want to be the drivers of your own lives, because unless you are your own drivers, life will drive you.”

Using the story of Calbert Thomas, principal of Seaforth High School, to make the point, he stressed the importance of having big, positive dreams and following them through regardless of what others think of them, or the obstacles that may emerge. Mr Thomas, who was a former vendor at the gates of the Seaforth High School in St Thomas, became a teacher and rose through the ranks to become the school’s principal.

Mr Lewis said in order to make excellence your brand, similar to Mr Thomas, one must make a habit of it.

“Being excellent doesn’t mean that you won’t fail, or that you won’t make mistakes. The challenge is presented when you fail to get up, or learn from the mistakes you made,” he advised.

Finally, Mr Lewis reminded the graduates about the importance of serving others and the significance of character. He said when people become conscious that their role in life is not merely to serve their own interests, but to serve others then, they would begin to understand the purpose of life.

“The beauty about serving others is that you are also serving yourselves,” he quipped, as he emphasised the emotional and health benefits of philanthropy.

He encouraged the young men to always remember to serve those who helped them along the way, and to give back, so that others can benefit and succeed just as they did. Remembering his own struggle through poverty in Bull Savannah, he reminded the Munronians to always remember the hard work and sacrifices of their parents and guardians.

“When you came to this institution, you stepped in as little boys. Today, you are big men. Never for a second think that you did it on your own,” he reminded the young men.

Mr Lewis also stated that character was still the best currency. Making a connection to his job at JN Bank, he underlined that character plays an important part in how decisions are made about who to lend to.

“It is easy to show off about your calibre; but it’s your character that will set you apart from the crowd,” he affirmed.