God Brought Me Back to My Passion! 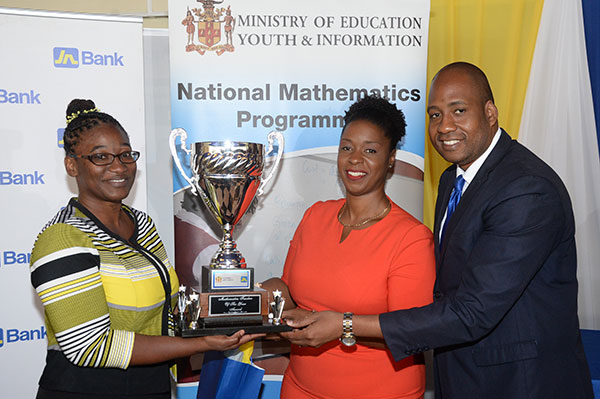 “I have a passion for math. All my friends [and] colleagues will tell you I walk, sleep, talk [and] eat math,” was how Karema Mundell-Thomas described herself, as she reacted to being named the Ministry of Education, Youth and Information’s National Mathematics Teacher of the Year 2019, during an interview.

Mrs Mundell Thomas, who brings mathematics to life for students in grades nine to 11 at the Carron Hall High School in St Mary, was selected from a pool of 15 regional finalists across the ministry’s six regions. She was presented with her award during a ceremony at the Terra Nova All-Suite Hotel in St Andrew, on Monday, March 25.

“It’s [been] a passion for me since high school,” a humbled Mrs Mundell-Thomas related. “My teacher in high school will probably tell you that I was a little bit disobedient, because she recommended that I study math at the tertiary level, and I went into counselling, but somehow the Lord turned me around and took me right back to my passion,” the mathematics educator of 15 years summarised her story.

In addition to her trophy, Mrs Mundell-Thomas will fly to San Diego, California in the United States next month, for the National Council of Teachers of Mathematics Conference, courtesy of legacy sponsors, JN Bank, where she will have an opportunity to network and acquire best practices, to further sharpen her skills. She also received an iPad.

Mrs Mundell-Thomas is the first mathematics teacher from the ministry’s region two, which comprises schools in St Mary, Portland and St Thomas, to win the competition in its six-year history. Region two has consistently been cited by the ministry’s agency, the National Education Inspectorate, as the region most in need of support based on the performance of schools. However, there have been improvements in the teaching and learning of mathematics in the region and across the country.

Reflecting on the overall intervention by the government in the past 11 years to raise the standard of teaching and learning, which the competition forms part of, national mathematics coordinator, Dr Tamika Benjamin revealed that the number of schools in critical need of support has decreased drastically.

She also noted that significant effort was made to improve cultural attitudes towards mathematics among teachers and students, under the ongoing Math Counts campaign. In addition, the leader of schools have also been engaged in mathematics teaching and learning, with the assistance of the National College for Educational Leadership.

“This programme (training of school leadership) encourages the development of our mathematics action plan; and that activity is now an integral part of the schools’ improvement plan,” she said.

During his remarks, JN Bank’s chief of business banking and public sector engagement, Ryan Parkes, also noted the improvements in performance since the inception of the government’s intervention.

Quoting reported data, he said: “In this our sixth year, as the main sponsor of this Mathematics Teacher of the Year Award, we observe the incremental gains that have been made in the performance of students, although we still have a long way to go.”

“In 2018, passes in mathematics rose by nearly eight per cent; however, that still represents less than 60 per cent of those who sat the exam at the CSEC level passing mathematics,” he pointed out.

Mr Parkes continued: “Similarly, in the Grade Six Achievement Test (GSAT), performance rose by 6.4 percentage points in 2017 when compared to 2015, moving from 56 per cent of students passing to 62.4 per cent of student gaining passing grades in mathematics.”

He urged the finalists in this year’s competition to become an example for other mathematics teachers across the country, in an effort to stifle the culture of fear of mathematics among students. Mr Parkes encouraged the teachers to become mentors to other teachers; and to record videos of themselves teaching lessons, so that other teachers would have an opportunity to see how good lessons are taught.

Keynote speaker, Dr Grace McClean, acknowledged the efforts made to improve outcomes under various initiatives, including a professional programme for mathematics specialists through a technical cooperation initiative with the Government of Japan and the Inter-American Development Bank. She noted that for Jamaica to function on par with the rest of the world, it must produce citizens who are competent in mathematics.

“Mathematics is fundamental to the knowledge economy. It is essential to the physical sciences, technology, business, financial services and many areas of information communication technology,” she said. “Proficiency in mathematics is, therefore, an imperative to enable us to navigate our way in the world around us.”