Investing in the Public Sector Can Drive Growth 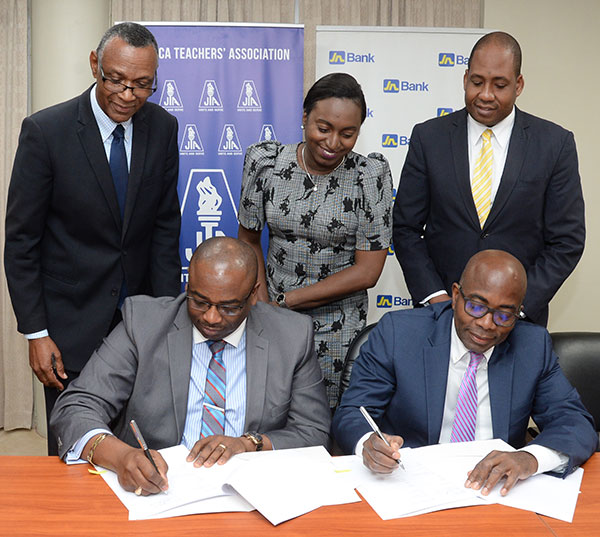 On the heels of its partnership with the Jamaica Teachers’ Association (JTA), JN Bank has also signed agreements with the Nurses Association of Jamaica (NAJ) and the Jamaica Police Federation (JPF) in its drive to become the commercial bank of choice for the public sector groups.

JN Bank, one of the country’s three leading commercial banks, has packaged products and services, as well as, leveraged offerings within The Jamaica National Group to serve workers in the nation’s public sector and assist them to achieve their financial goals.

“There is a bank in Jamaica that recognises the collective wealth of the police,” declared Detective Corporal Doris Stewart Walcott, legal director for the Jamaica Police Federation, as she welcomed the partnership with JN Bank.

“Our purchasing power extends to hundreds of millions and even extends to billions of dollars per quarter,” she said. “Together we can do more.”

Det. Corporal Stewart Walcott supported her President, Inspector Sheldon Gordon, who said the partnership with JN Bank was important to serve the members of the Police Force.

“If we are to be a force for good, then we must embrace partnerships,” Inspector Gordon affirmed. “The JCF (Jamaica Constabulary Force) and the Police Federation, we just cannot do it alone. We just don’t have the resources to do it alone; therefore, we need to partner. But, in doing so, we must partner with institutions which are proven and tested; and I believe the JN Group has been proven tried and tested,” he commended JN Bank and the JN Group, to loud applause.

President of the JTA, Dr Garth Anderson, described the move by JN Bank as a major investment in teachers.

Similarly, members of the NAJ praised the partnership, noting that it would make more banking services accessible to nurses.

“The portion of it (the partnership) that I really like is the accessibility of your services, meaning that we can afford the services,” said NAJ president, Carmen Johnson.

She also welcomed the financial literacy programme, which the bank would include, through its JN Foundation’s Be$Wise financial initiative, to empower the organisation’s members.

“In an effort to achieve what we want to achieve, we (nurses) tend to move from institution to institution, bearing in mind that our salaries are not where we want it to be. And so, in doing that, many of us are not understanding what benefits can be accrued if we look at a bigger picture, rather than the smaller picture of moving from here to there,” she advised nurses.

Pointing to the continued heavy migration of nurses from Jamaica, the NAJ president noted that the partnership with JN Bank could also assist in keeping nurses positive about their economic prospects at home and grounded in Jamaica.

“I know housing is one of the big things, and the car, why many of our nurses are leaving, because we get very despondent when we are not able to purchase any of those fixed assets,” she acknowledged. “They have the design your own mortgage, DYM, and within that, they have looked at how they can make the payments affordable to nurses, both your opening and closing costs,” she explained to her members.

JN Bank’s managing director, Curtis Martin, said housing continues to be a challenge for many Jamaicans, including those in the public sector.

“A house provides one of the best mechanisms to build wealth. Just imagine ten years ago you purchased a house for $7 million or $8 million and the value of that has perhaps increased two or three times,” he explained. “Therefore, a home not only provide shelter, but it’s also a steady way to build wealth, because you can use the equity to send your children to school, and do many other things,” he said.

The JN Bank managing director said that financial inclusion and empowerment is critical in assisting workers in the public sector to achieve wealth, underscoring that many who serve the public are themselves underserved. He stated that under the JN partnership, members will have access to affordable credit, so that they can acquire capital and assets.

“We are prepared to make a major contribution to enhancing the wellbeing of workers in the public sector,” he maintained.