With accelerated growth in the bauxite/alumina industry, sub-contractors such as Conveyance Partners Jamaica (CPJ) Limited are preparing to cash-in on the expansion by building out their own capacity.

The mining and quarrying sector was one of the largest contributors to the growth in the economy in the January to March quarter for 2018, according to the latest Planning Institute of Jamaica (PIOJ) report released in May.  The sector, which is dominated by the bauxite/alumina industry, grew by an estimated 25.5 per cent, compared to the corresponding period last year.

The bauxite/alumina industry has been trending upwards since 2106, according to data from the Ministry of Transport and Mining. A total of 1.86 million tonnes of alumina was produced in Jamaica in 2016, after which Alumina Partners of Jamaica (Alpart), the country’s biggest refinery, was reopened in 2017 by new owners, China’s Jiuquan Iron and Steel Company Ltd (JISCO).

In response to the growth, CPJ, a new company, closely aligned to the 18-year-old entity Conveyance and Konstruk’Shon Limited, has purchased 14 Shacman trucks, through the Tank-Weld Group, to add to its fleet of 14 other trucks, which it subcontracts from independent operators, said Karen Lawson, spokesperson for CPJ. The Clarendon-based company is one of the aggressive sub-contractors underpinning the country’s growing mining industry. 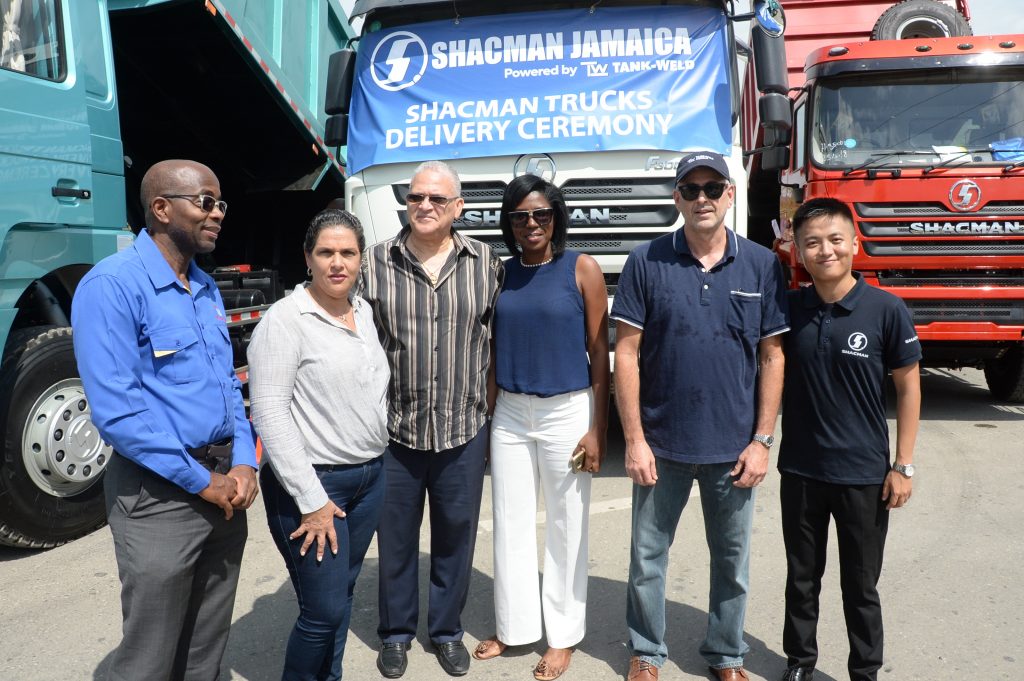 “We needed the trucks, because there is increased demand for our service,” the CPJ spokesperson stated, as the trucks were handed over on May 12. “This is the first of many purchases and we intend add to another 14 trucks by year end.”

The purchase of the vehicles represents the first time in several years that the bauxite industry has received new heavy-duty trucks.

“Alpart is starting back up, and they are not yet working at full capacity, and I believe that they will bring on additional capacity,” Ms Lawson said, at the Tank-Weld offices at Six Miles, St Andrew.

She explained that the new Shacman trucks will enhance the efficiency and reliability of their fleet and improve CPJ’s operations, as it receives and stockpiles bauxite, which it then feeds to the Alpart refinery. “We also do bauxite haulage for JAMALCO, another major alumina refinery and bauxite producer”, pointed out Ms Lawson.

“The acquisition of the trucks, through Tank-Weld, was financed by JN Bank,” Ms. Lawson said, noting that, “the support from Tank-Weld was helpful and the JN Bank transaction painless.”

Curtis Martin, managing director, JN Bank, a member of The Jamaica National Group, said that the bank was growing its operations, to serve more people across the country.

“We are supplying the foreign currency to purchase these trucks,” Mr Martin explained, “because it is a classic way to drive the country’s economic development, by financing the acquisition of high quality equipment trucks to serve the vital mining sector.”

Chris Bicknell, chief executive officer, at Tank-Weld Group, related that, “we at Tank-Weld have been testing the Shacman trucks for seven months; however, they were being operated here in Jamaica for years by China Harbour Engineering Company. We are pleased with them in every sense, and I am excited about the future of Shacman trucks in Jamaica.”

The 14 vehicle sale to CPJ was the first successful sale by Tank-Weld, since the group established its distributorship for Shacman, earlier this year. This new sales unit was also supported by Shacman’s decision to establish its regional headquarters at Six Miles, close to Tank-Weld’s main offices, in Jamaica.

Fisher Wang, commercial representative for the Shaanxi Automobile Group Co. Ltd (Shacman) said, “We want to introduce our brand to more customers. There are several Chinese companies in Jamaica, which are already familiar with our equipment, therefore, we saw this as a good opportunity for us.”

“For a long time, second hand commercial trucks in Jamaica were brought in from Japan or the United States of America,” Mr Wang said. “We see Tank-Weld as great partners. They have a good service centre for the trucks, and this is an opportunity to offer our Jamaican customers a good product, with both service and spare parts support.”