For 26-year-old Nacore Stewart, migrating to Canada at 20 years-old was no easy transition; however, with goals in mind and a strong determination to succeed and change his circumstances, he has already found a fulfilling lifetime career.

Stewart, who hails from the community of Barnstaple in deep rural St Ann, is now a police officer with the Ontarian Provincial Police, in the Highway and Safety Division, a much sought-after career choice in Canada.

According to the Canadian Business news website, being a police officer falls within the top 25 jobs in Canada. 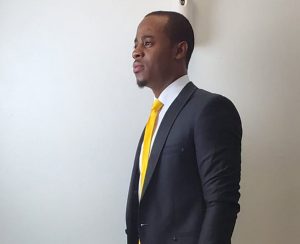 “We grew up poor, so there were definitely struggles, because I wasn’t born with a gold spoon in my mouth. Both my parents were farmers and my father also did a little carpentry on the side. I remember when I was attending primary school, I went barefooted at one point. Then when I started high school, I had to wear my cousin’s shoes which were bigger than my feet, I had to stuff them so they could fit. Nevertheless, I always knew I wanted to become someone successful in life, and so I set out on that journey,” he related.

“As an unexposed country boy going to a new country for the first time, everything was shocking. The big cities, trains and buildings were new to me, but I was ready to tackle my new life,” Stewart explained.

Stewart, who is a past student of the Brown’s Town Community College went from job to job in Toronto but decided he wanted more for himself.

“I then signed up for the Police Foundations Course at the Queen’s College of Business, Technology and Safety; and started classes on April 11, 2016. That same day in class, I wrote down “#GOALS2020,” because I told myself that I’m going to make becoming a police officer a four-year goal,” he said.

Despite all of this, Mr Stewart graduated from the college with an award of excellence for achieving a 90 per cent average in Academics.

After completing other requirements, he started at the Police Academy in June 2020 and ended in October 2020, fulfilling his four-year goal of becoming a police officer. He noted however, that training was very hard.

He was also awarded Most Improved Ambassador and Team Player of the Year. Subsequently, he was assigned JN WAY North Coast Team Lead for the 2015/16 cohort; however, he migrated shortly after he received the designation.

Officially launched in 2014, JN WAY is a youth banking programme geared to promote financial literacy and empowerment to tertiary students and young adults, while positioning JN Bank as the preferred financial institution for young people.

“The JN WAY programme helped me to hone my leadership skills, make meaningful networking connections, excel in teamwork and gain exposure,” Mr Stewart affirmed. “I was also a very shy person and the programme helped to change that. I will forever be grateful to JN Bank for what they have done for my development.”

Shanna Kaye Wright Vaughn, youth banking officer, in charge of the JN WAY Programme, said that Mr Stewart was one of the humblest students to be a part of the programme.

“Over five years later and Nacore still maintains contact with the JN WAY team. The current ambassadors know him, and he has even guided some from his alma mater to apply to/participate in the Programme. I have admired how much he is disciplined in setting and achieving his goals and has really kept us in the loop along his journey. He is truly an exceptional person and I am very proud to have been a reference for his job as a Police Officer. I am extremely proud of him,” Mrs Wright Vaughn related.