Local Manufacturers Charged to Take Position in the Global Market

Richard Pandohie, president of the Jamaica Manufacturers’ and Exporters’ Association (JMEA), on the weekend, charged players in the sector to rise up and take their place in the global market.

He was speaking at the JMEA awards gala, held at the Jamaica Pegasus hotel on Saturday, October 5.

Mr Pandohie noted that although the sector continues to experience notable growth, there is still room for significant improvement.

The manufacturing and export sectors, in 2018, contributed $156 billion to gross domestic product, employing 6.4 per cent of the total labour force. Further data for the quarter ending June 2019 from the Statistical Institute of Jamaica shows that the sector has grown by 3.3 per cent over the same period last year. 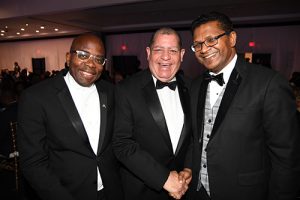 Meanwhile, Curtis Martin, managing director of JN Bank, who presented the Legacy Award, which recognises the resilience of companies operating for 25 years, said the success of the industry does not only rest squarely on the shoulders of the manufacturers and exporters, but is the shared responsibility of all Jamaicans.

“We are all agents of the cause and each of our roles is equally important. The government as responsible policy framers; media, as the agenda setters, and citizens, as consumers,” he said.

“For my part, as a financier, I recognise that banks and other institutions, for example, must move beyond simply seeing themselves as providers of financing, and for us to get in the game and habit of educating and demystifying issues for persons in the productive sector,” Mr Martin remarked.

He noted that many persons in the sector do not always understand the various forces at play in the marketplace and, therefore, that lack of understanding sometimes creates unnecessary panic, which can result in undue burden for manufacturers, exporters and consumers.

“And, this impacts positive economic activity and growth,” he said.

He said more must be done by members of the financial community to assist the sector in gaining the knowledge and expertise they need to be competitors on the world’s stage.

Beer manufacturers, Red Stripe were among the big winners at this year’s awards.

The company copped three of the 18 awards, namely: The Vision 2030 Award for Corporate Social Responsibility; The Robert Lightbourne Award for Productivity and Competitiveness; and The Prime Minister’s Award for Top Large Manufacturing Exporter.

Following closely behind were Caribbean Foods Ltd, which walked away with two awards: The Ray Hadeed Award for Best Small and Medium Sized Enterprises and Champion Small Services Exporter.