Lovelace is Off to Trinidad Carnival! 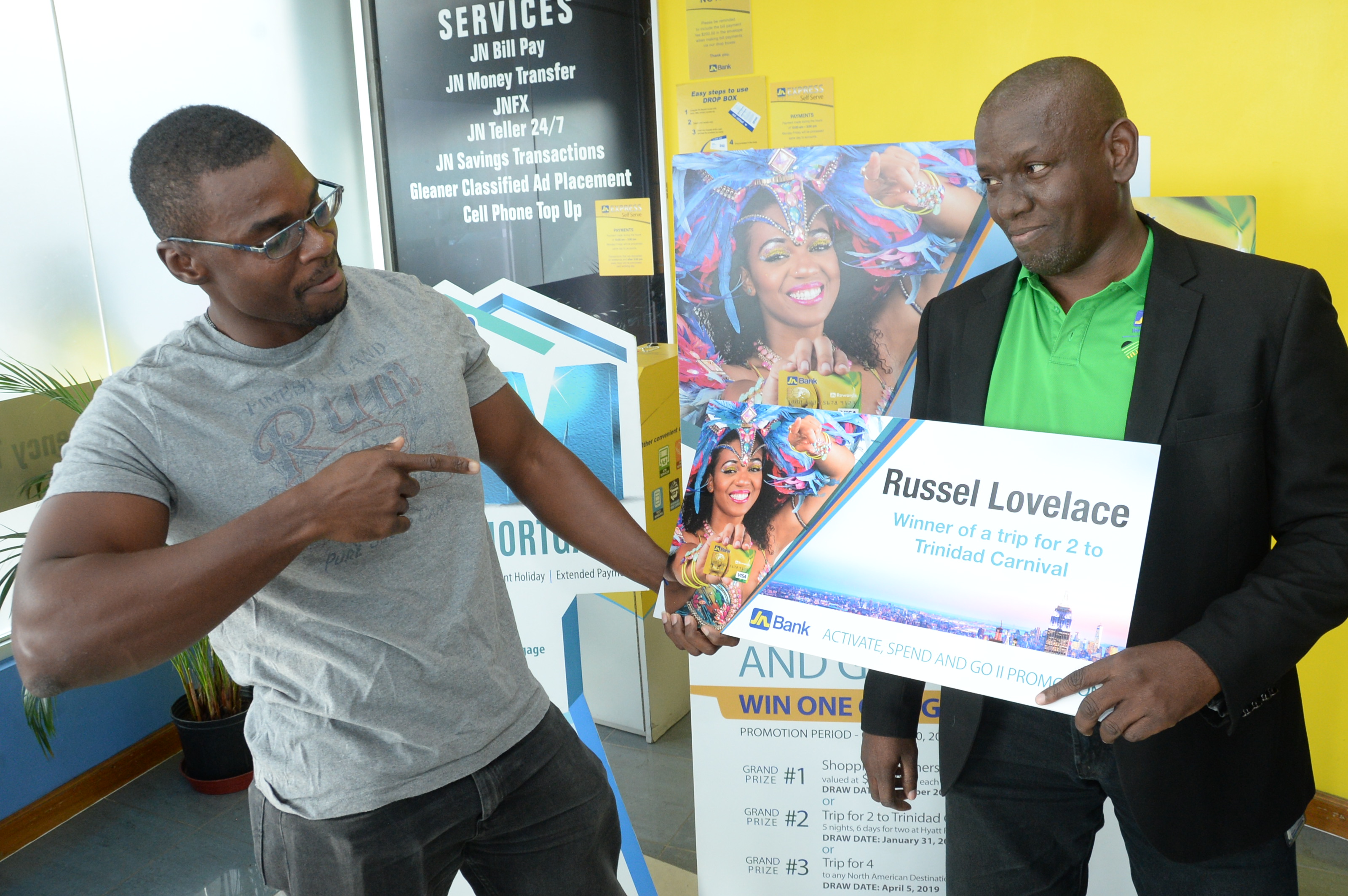 An elated Russel Lovelace (left) celebrates, as George Baker, Head of Credit Card Operations at JN Bank, presents him with the prize for an all-expense paid trip for two to Trinidad and Tobago Carnival under the Activate, Spend and Go Promotion. The presentation was made at the Knutsford MoneyShop in New Kingston on Friday, February 22. Mr Lovelace is the grand prize winner in the second round of the Activate, Spend and Go promotion. The third and final grand prize draw for a trip for four to any North American destination via Jet Blue airline, will be made on April 5.

Like many soca lovers, “playing mas” in Trinidad and Tobago Carnival has been a life-long dream for Russell Lovelace. Thanks to JN Bank, he can now cross this item off his ‘bucket list,’ as come March 4 and 5, the 24-year-old will be among thousands of revelers prancing and masquerading through the streets of Port-of-Spain.

On Friday, February 22, Mr Lovelace was presented with the grand prize of an all-expense paid trip for two, to Trinidad Carnival, after simply activating and spending approximately $10,000 with his JN Bank VISA credit card.

“This is a dream come true. I have been a soca fan all my life; and going to Trinidad Carnival was one of the things I’ve always wanted to experience,” he said. “My girlfriend is even more ecstatic about this trip than I am; and, we are planning to have a great time together.”

Mr Lovelace, who describes himself as a “technician by day” and a “soca-warrior by night,” will depart Jamaica with his girlfriend, Sashay Salmon, on Thursday, February 28.

They will spend six days and five nights at the Hyatt Regency in Port-of-Spain, courtesy of JN Bank. As part of their prize package, they will also receive US$500 spending money, pre-paid tickets to three carnival fetes, and two free carnival costumes.

The Kingston-native said he is mostly looking forward to the road marches; as, he wants to compare how the Trinidad Carnival experience equates with the Jamaican Carnival.

“I have always heard stories about Trinidad Carnival; and many persons say that it’s the “mother of all West Indian carnivals,” therefore, I am definitely looking forward to the experience. I have also never ‘played mas,’ but, have always watched from the sidelines; therefore, this will be a new and welcomed experience from all angles,” he related.

Mr Lovelace, who is also a “gym fanatic” said he is physically ready for the carnival festivities, which can be a grueling test of endurance.

“I always find time to work out at least three days a week, hence I definitely have the stamina to keep up with the road marches,” he said. He and Sashay are also planning to do some “sightseeing” in Trinidad prior to returning to Jamaica.

The JN Bank’s “Activate, Spend and Go,” promotion is still open to persons with a JN VISA Credit Card. The promotion continues until April 5, 2019, when the third and final draw of a trip for four, to any North American destination via Jet Blue airline, will be made.

The first draw under the promotion was made in December 2018, when three persons won gift vouchers valued at $150,000 each, for shopping sprees at Singer Jamaica and Megamart.