“Come Prepared to JN Expo with your Documents,” PICA 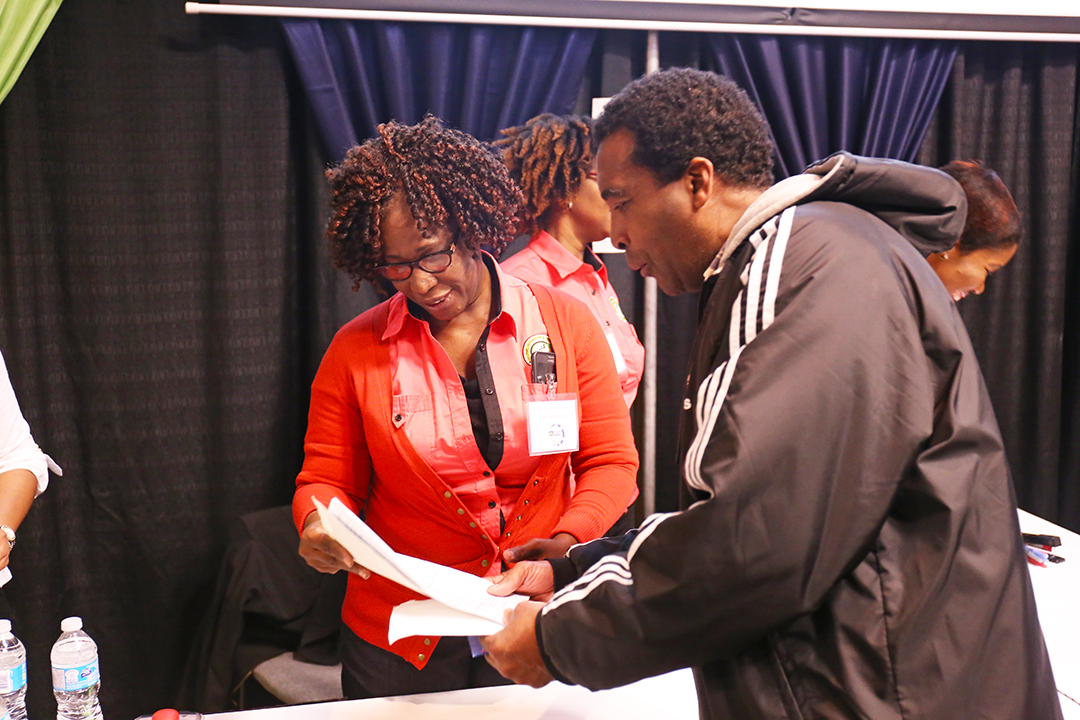 Carol Hammond (left), director of citizenship at the Passport, Immigration and Citizenship Agency (PICA) provides assistance to a patron during the Jamaica National Expo in Canada last year.

The second annual Jamaica National Group Expo will be held in Montreal and Toronto under the theme: “Connect, Learn, Grow”, on April 28 and 30. And, patrons will be able to access critical services from several Jamaican agencies and companies.
Among those participating in this year’s event are: government entities, such as: The Passport, Immigration and Citizenship Agency (PICA) and JAMPRO; real estate businesses, including Richmond Development and Oceans Spring; and companies in the JN Group.
PICA is encouraging patrons attending the 2018 JN Expo to come prepared with their documents to apply for various services.
Carol Hammond, director of citizenship at PICA, said this year, the agency will be offering patrons: passport, immigration, citizenship and unconditional landing status application services.
She outlined that patrons will be able to apply for a Jamaican passport and pursue the process to obtain Jamaican citizenship, by descent or marriage, or apply for unconditional landing status.
“We will also be accepting applications for renewal and new passports, as well as, applications for citizenship services for the registration of minors. Therefore, we want persons to come prepared for those services,” Mrs Hammond informed.
The PICA director of citizenship advised that some of the documents required by PICA include: birth certificates; statements of live birth; marriage certificates; divorce papers; official identification; and a police report, valid for at least six months.
“Once patrons come prepared with their documents PICA will be able to accept their applications. Otherwise, we will provide information and guidance as to how to make an application later on, at the Jamaican Consulate,” Mrs Hammond stated.
Jerrold Johnson, chief representative officer, in the JN Canada Representative Office, said the Expo is a great opportunity for those persons who are interested in investing in or expanding their businesses to Jamaica; or, want to explore current real estate offerings and access well-needed services.
The Expo is scheduled to be held at the Pearson Convention Centre in Toronto on Saturday, April 28 and at Ruby Foo’s Hotel in Montreal on Monday, April 30. The event will take place between the hours of 9:30 am and 7:00 pm.
Lorna Ebanks, sales agent, Richmond Development Company, said there is a demand for properties developed by Richmond among the Canadian-Jamaican community. And, this demand prompted Richmond to sign on to participate in this year’s Expo.
“Most of our clientele are in the Canadian market; and, from what we have been told, they have been asking for us. Consequently, in addition to the invitation from the JN Group, we are aware of the value of this particular market to our business, hence we look forward to participating in this year’s Expo,” Ms Ebanks said.
She informed that Richmond has two new developments on the market: “The Crest” and “Fern Court Apartments.” Both developments are in their final phases and are located on the Richmond property in Ochi Rios, St. Ann.
Ms Ebanks revealed that the company is offering a special promotional rate of JMD$100 to CAN$1 for the Expo.
Mr Johnson informed that representatives of the JN Bank attending the Expo will highlight the commercial bank’s offerings, including: mortgages; JN Visa Credit Card and JN Rewards.
He also revealed that other JN Group member companies participating in the expo are: JN Life Insurance Company Limited; and JN Money Services Limited.
The JN Expo is being organised by The Lynx Canada Foundation, in association with the JN Representative Office in Canada; and under the patronage of Mr Earl Jarrett, chief executive officer, of The Jamaica National Group.
For more information about services at the 2018 Expo, please visit www.jnexpo.ca.

Members of the audience during last year’s inaugural staging of the Jamaica National Expo in Canada.