Over 70 amateur golfers turned out to the Remington Parkview Golf and Country Club in Ontario on Saturday, July 6 for the Friends of Boys’ Town Charity Golf Tournament.

The event, now in its 16th year, was sponsored by JN Bank and gives members of the community a chance to unite in a game of golf in order to raise much-needed funds in support of the Boys’ Town Community Group in west Kingston, Jamaica.

Tim Escoffery, Chairman of Friends of Boys’ Town, Toronto Chapter, said the objective was to raise CAN$10,000 in support of the various programmes offered by Boys’ Town. “These include the feeding programme, the infant school and other educational and social initiatives executed by Boys’ Town,” he said. “We were able to raise about CAN$6000 and we are extremely grateful.”

He thanked the golfers who turned out in their numbers to support the worthy cause, noting that the event has grown considerably over the years. “We had persons from Canada, the United States and Jamaica, coming together for this 16th anniversary event. We are extremely grateful for the continued support each year and know that the children in Jamaica, who are a part of Boys’ Town community, are even more appreciative for the support,” he stated. 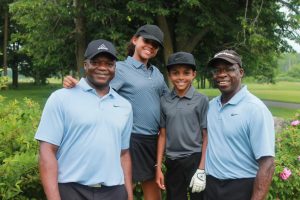 Boystown6: Golfers of all ages supported the worthy cause

Emile Spence, Chief Representative Officer, JN Bank Canada Representative Office, who delivered the keynote address at the annual charity dinner, which followed the golf tournament, lauded the Toronto Chapter of Friends of Boys’ Town for the tremendous work they have been doing to assist and give back to the young people in Jamaica during the past two decades.

“The members of the Toronto Chapter of Friends of Boys’ Town have made it their life’s commitment to serve others, to give back to their people, their community and their home country,” he said.

He further said Boys’ Town is a model for other community groups to follow, based on the many success stories that it has generated over the past almost 80 years, and the great impact it has made on all areas of cultural, social, economic and spiritual life in the inner city.

Originating as a project to teach skills to young males in the prison system in 1940, Boys’ Town has grown tremendously, touching the lives of thousands of at-risk youth in Jamaica.

Many of the country’s local and international musicians and sportsmen, who have contributed to and positioned culture on the global map, are products of the organisation.

We are Celebrating 30 Years of Service to Canada